The Traffic Speed Deflectometer (TSD), is an innovative Rolling Wheel Deflectometer measuring pavement response to applied load. The unique TSD technology is developed by Greenwood Engineering and has initiated a shift of paradigm in pavement engineering worldwide.

The Greenwood TSD provides continuous bearing capacity results at project and network level while following the flow of traffic. This makes the Greenwood TSD highly cost-effective.

Synchronized view of your network pavement structural and functional conditions

The TSD provides repeatable, detailed and accurate data, from which bearing capacity indices can be derived and pavement fatigue / residual life can be estimated. This information is essential to decide how and exactly from where to where to repair.

International studies show major savings and more cost-effective road maintenance when plans are based on structural data and focus is kept on repairing the underlying reasons of the road problems, instead of only dealing with the symptoms on the surface.

The TSD quickly identifies the weakest road section, which allows for correct timing in preventive maintenance.

This example is fictional

The TSD follows the traffic flow at normal truck speed. This means no blocking of lanes, no queues and currently no recorded accidents.

As the TSD is measuring while following normal traffic speed, it is possible to measure hundreds of kilometers per workday. And because the TSD is operated by only two persons – a driver and an operator – it has no need for assisting personnel closing road lanes or setting up road markings up etc.

The Traffic Speed Deflectometer measures the velocity of deflection rather than displacement. To measure the pavement-motion, the TSD uses the principle from the Doppler effect where the movement of a signal-source is creating a change in the wavelength created by the source.

In the TSD, the Doppler lasers are sending out a well described signal, which when reflected from the moving pavement has changed wavelength depending on the pavement velocity.

In this way, road surface texture and roughness, have no influence on the accuracy of bearing capacity measurements with the TSD.

For new TSDs, ten or more Doppler lasers are installed to measure the pavement-motion in front of and behind the load wheel to picture the full deflection bowl.

SCI300 and more. Accurate and repeatable

The TSD provides the full picture of the deflection bowl with well-known values like Surface Curvature Index 300 (SCI 300), maximum deflection (d0) and more. This can be achieved when Doppler lasers are installed both in front of and behind the load wheel and in the longitudinal centerline between the twin tyres of the trailer. 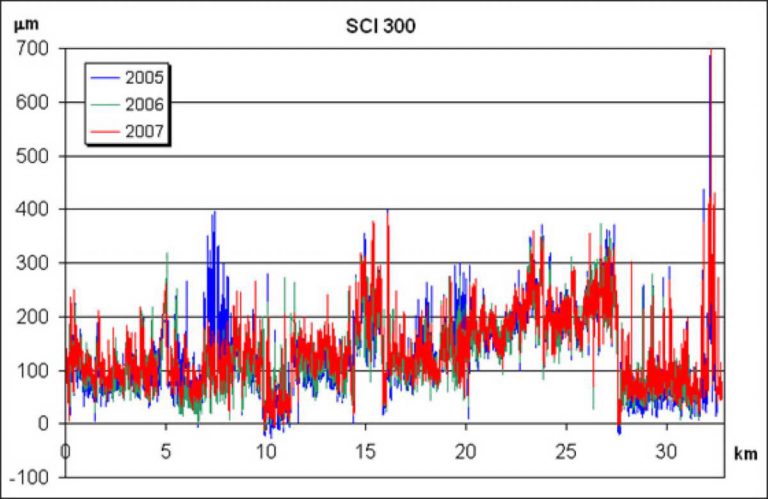 New wearing course was added around km 20 between 2005 and 2006. The graphs for 2006 and 2007 are almost identical, and no road change have been made between these two measurements.

Every TSD is uniquely tailored to meet our customers’ needs. Subsystems like the Surface Imaging System, Right-of-way Imaging, Ground Penetrating Radar and similar equipment can be installed to simultaneously collect additional functional data from the road.

Data from these subsystems are synchronized with the structural data in real time, resulting in a set of a big data for the road network – all obtained in one drive.

The first TSD was delivered to the Danish Road Directorate under the Ministry of Transport in 2004 and is still in regular use for bearing capacity measurements on state roads in Denmark.

Since then, the development has continued and the experience has grown as more than a dozen TSDs are now in operation for various research projects and maintenance optimization tasks in USA, South Africa, Australia, China, England, Germany, Italy, Poland and Denmark.